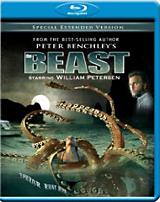 Timeless Media Jumps Into Blu-ray with Trio of TV Titles

The first three titles on Timeless Media's schedule are all made-for-television productions, among them the extended version of the 1996 Peter Benchley undersea thriller 'The Beast,' the four-part Discovery Channel anthology 'A Haunting: Twilight of Evil,' and a 40th anniversary edition of the classic 1959 CBS News special 'Man on the Moon,' narrated by Walter Cronkite.

All three will receive a concurrent release of August 25.

The only tech specs we have received are BD-50 dual-layer presentations for both 'Beast' and 'Haunting' (due to their 200-minute runtimes), and a BD-25 single-layer for 'Man on the Moon.' All will be in 1080 video, with no word on audio specs.

You'll find the latest specs for all three of Timeless Media's first wave of titles linked from our Blu-ray Release Schedule, where they're indexed under August 25.