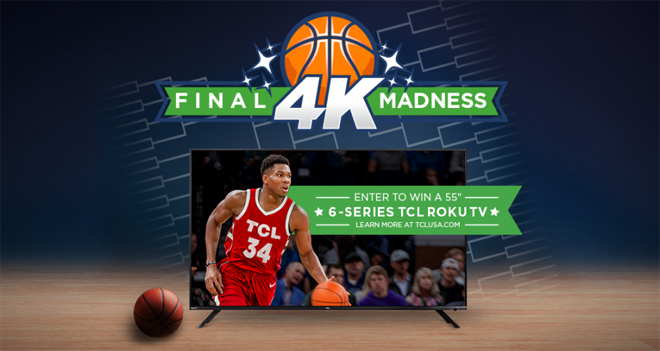 The company is giving away TVs every week in March.

To coincide with the 2019 NCAA March Madness Tournament, TCL has announced the launch of its Final 4K Madness Giveaway. The promotion gives fans the chance to win a TCL 55-inch 6-Series Roku TV throughout the month of March.

"With out-of-the-box stunning picture, our award-winning TCL Roku TVs gives fans access to college basketball games and a perfect centerpiece to enjoy the tournament at home," said Chris Larson, Senior Vice President, TCL North America. "Everyone should have an opportunity to enjoy our lineup of popular TVs and the Final 4K Madness Giveaway is a fun and easy way for fans to win a viewing experience that’s second to none."

As part of the giveaway, one random winner will be selected every Friday in March to receive a 55-inch 6-Series 4K TCL Roku TV. Interested parties can enter the contest via www.tclusa.com/final-4K-madness or through TCL's social media sites. Winners will be chosen and announced on March 8, March 15, March 22, and March 29 at 5:00pm PST.

The TCL 6-Series 4K HDR Roku TV features Dolby Vision and HDR10 support, along with the Roku OS smart TV platform. In addition, the set uses Contrast Control Zone Technology with 120 dimming zones on the 65-inch model. Likewise, the panel uses NBP Photon technology with LED phosphors to provide Wide Color Gamut support. A new iPQ Engine is implemented as well to maximize coverage of the DCI-P3 gamut and provide accurate color settings right out of the box. An HDR Pro Gamma feature is also offered to maintain details in dark and bright scenes regardless of a room's lighting conditions.