Leni Riefenstahl's 'Triumph of the Will' Dated for Blu-ray

The 1935 Third Reich film is headed for Blu-ray this winter.

In an early announcement to retailers, Synapse Films says 'Triumph of the Will' will arrive on Blu-ray on December 8.

Leni Riefenstahl's classic piece of historical filmmaking, filmed during the 1934 Nazi Party Rally in Nuremberg, Germany, is considered by many to be one of the most important films ever made. Realized by Paul Joseph Goebbels, Hitler's Reich Minister for Public Enlightenment and Propaganda, this film was created to influence all of Germany to support the power of the Nazi Party.

Historically significant and, at times, a horrifyingly manipulative exercise in propaganda for the Nazi regime, TRIUMPH OF THE WILL continues to be controversial eighty years after its original release and has been banned in Germany for many decades. Until her death in 2003, Riefenstahl was under fire for her personal relationship with Adolph Hitler, spending her life haunted by the shadow of the Nazi Party.

You can find the latest specs for 'Triumph of the Will' linked from our Blu-ray Release Schedule, where it is indexed under December 8. 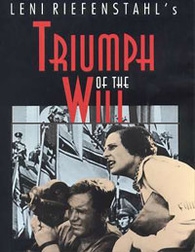