Did You Hear That 'Thundercrack!' on Blu-ray?

In an early announcement to retailers, Synapse Films will be releasing 'Thundercrack!' on Blu-ray on December 8.

Witness if you dare... THUNDERCRACK!... the world's only underground kinky art horror film. With the initial setup of an atmospheric gothic tale a dark and stormy night breakdown featuring a creepy old house on the hill, it quickly turns eerie and different. A tour de force of underground filmmaking with a plot beyond description, this film fully exposes itself with amazing dialogue and trash-noir lighting through which to peer at the pickles, the puke and the polymorphs.

In 1975, Curt McDowell and writer/actor George Kuchar created the utterly brilliant THUNDERCRACK!, a film not recommended for those with tender sensibilities. A true cult classic that has shocked, excited and amazed audiences worldwide for 40 years, this presentation is the first ever official North American video release!

You can find the latest specs for 'Thundercrack!' linked from our Blu-ray Release Schedule, where it is indexed under December 8. 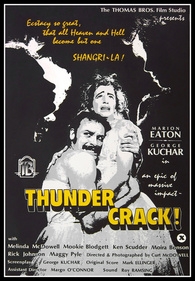