The non-limited version will be released this September.

In an early announcement to retailers, Synapse Films will be bringing 'Tenebrae' to Blu-ray on September 13.

Italian terror master Dario Argento elevates the Giallo genre to new heights with 1982's TENEBRAE, a darkly humorous, futuristic and notoriously grisly horror film many consider to be one of his finest works.

American mystery author Peter Neal (Anthony Franciosa) comes to Italy to promote his newest novel, TENEBRAE. Unfortunately, a razor-wielding serial killer is on the loose, taunting Neal and murdering those around him in gruesome fashion just like the character in his novel. As the mystery surrounding the killings spirals out of control, Neal investigates the crimes on his own, leading to a mind-bending, genre-twisting conclusion that will leave you breathless!

You can find the latest specs for 'Tenebrae' linked from our Blu-ray Release Schedule, where it is indexed under September 13. 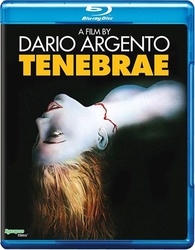