The comedy horror sequels are heading to Blu-ray in August.

In an early announcement to retailers, Synapse Films is preparing 'Basket Case 2' & 'Basket Case 3: The Progeny' for Blu-ray on August 9.

'Basket Case 2' - Duane Bradley and his surgically-separated twin brother Belial return in this frightfully gory follow-up to Frank Henenlotter’s original monster movie classic, BASKET CASE. After surviving a fall from a hospital window, the two brothers become media targets. Duane’s aunt, Granny Ruth (played by world-famous Jazz singer Annie Ross), whisks the duo away to a secluded mansion, where other freaks-in-hiding live out their days away from public scrutiny. When a snooping tabloid reporter finds the location of the mutants, Duane and his new family must stand together to keep their freedom a secret. And, in all the chaos, Belial might actually find true love! Synapse Films is proud to present BASKET CASE 2 in a beautiful high-definition transfer from the original 35mm camera negative.

Specs have not been detailed yet, but supplements will include: THE MAN IN THE MOON MASK – Interview with "Half Moon" actor, David Emge; BEYOND THE WICKER – Behind-the-Scenes Featurette from Special Effects Makeup Artist, Gabe Bartalos; and Reversible Cover art with newly commissioned front piece by Joel Robinson. 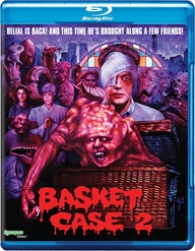 'Basket Case 3: The Progeny' - He’s back. He’s bad. And, he’s a dad! Belial, everyone’s favorite beast-in-a-basket, is back in this sensational third film in the wildly macabre BASKET CASE horror series. After being separated again from his conjoined twin brother Duane (Kevin Van Hentenryck), Belial finds out he’s going to be a deformed daddy! Mrs. Belial (“Eve”, played by Denise Coop) delivers a litter of bouncing baby monsters, but the blessed event turns into a nightmarish ordeal when the police kidnap the little critters. They should know it’s not safe to anger Belial! Attacking the cops in a climactic, gory rampage, everyone’s favorite mutant mauler stops at nothing to get his newborns back! Synapse Films is proud to present BASKET CASE 3: THE PROGENY in a beautiful high-definition transfer from original 35mm vault materials

Specs have not been detailed yet, but supplements will include: Original Theatrical Trailer; and Reversible Cover art with newly commissioned front piece by Joel Robinson. 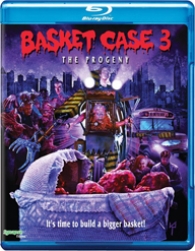 You can find the latest specs for 'Basket Case 2' & 'Basket Case 3: The Progeny' linked from our Blu-ray Release Schedule, where they are indexed under August 9.