The Blu-ray featuring Julianne Moore, Ellen Page, and Steve Carell will be available in stores in February.

In an early announcement to retailers, Summit Entertainment and Lionsgate will be bringing 'Freeheld' to Blu-ray on February 2.

After detective Laurel Hester (Julianne Moore) is diagnosed with cancer, she learns that government officials won't award her pension benefits to her domestic partner, Stacie (Ellen Page). Refusing to accept the officials' decision, Laurel and Stacie lead a battle for equal rights in this unforgettable movie that speaks to the power of love and the pursuit of justice.

The Blu-ray will feature 1080p video, a lossless 5.1 soundtrack, and supplements include: "The Making of Freeheld" Featurette; "Freeheld to Freedom: Ocean County Then and Now" Featurette; Oscar-winning Documentary Short "FREEHELD"; and Audio Commentary with Director Peter Sollett and Actors Julianne Moore and Ellen Page.

You can find the latest specs for 'Freeheld' linked from our Blu-ray Release Schedule, where it is indexed under February 2. 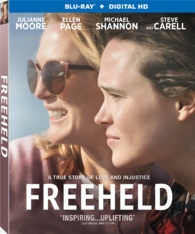