Coming Soon to Streaming: STRANGER THINGS, ORANGE IS THE NEW BLACK, and More

Check out our latest roundup of new streaming trailers.

Netflix, Hulu, and MotorTrend have all released new trailers and info for several of their upcoming series and films, including a special preview clip from the third season of Netflix's Stranger Things.

And here's a full rundown of additional streaming titles scheduled to arrive on each service:

Historical Roasts with Jeff Ross (Netflix, May 27) - Renowned "Roastmaster General" Jeff Ross's new half-hour comedy series Historical Roasts brings together A-list comedians in period-appropriate garb to celebrate prominent historical figures of the past, from Presidents (Abe Lincoln) to Rockstars (Freddie Mercury) and everything in between. Based on the Los Angeles live show of the same name, the six-episode series is “teaching history a lesson” and honoring some of the most important voices of our time the only way they know how — with a searing roast.

How to Sell Drugs Online (Fast) (Netflix, May 31) - How do you win back your girlfriend from the school drug dealer? For Moritz, the answer is clear: sell better drugs. Together with his best friend Lenny, he launches, out of his teenage bedroom, what turns into an unexpectedly successful online drug market. Soon, as accidental drug dealers, they’re faced with standard drug empire problems: meeting demand, quality control, and, most importantly: not getting caught. Inspired by true events, How to Sell Drugs Online (Fast) is a modern story about lost love, the highs and lows of friendship, and the hurdles of growing up.

Black Mirror: Season 5 (Netflix, June 5) - An anthology series that taps into our collective unease with the modern world, with each stand-alone episode a sharp, suspenseful tale exploring themes of contemporary techno-paranoia. Without questioning it, technology has transformed all aspects of our lives; in every home; on every desk; in every palm - a plasma screen; a monitor; a Smartphone – a Black Mirror reflecting our 21st Century existence back at us. The series is created and written by Charlie Brooker, and executive produced by Brooker and Annabel Jones.

The Black Godfather (Netflix, June 7) - Who is the Black Godfather? Witness the exceptional and unlikely rise of Clarence Avant, a music executive who influenced legends such as Bill Withers, Snoop Dogg, Quincy Jones, Muhammad Ali, Hank Aaron, Presidents Barack Obama and Bill Clinton and so many more.

The Chef Show (Netflix, June 7) - Cooking is a journey. And making a meal is about more than just food. It’s about appreciating friends, family and tradition. An opportunity to come together. To learn, to share and to celebrate different flavors, cultures and people. The Chef Show is Executive Produced and directed by Jon Favreau. Roy Choi and Annie Johnson also serve as Executive Producers.

Tales of the City Starring Laura Linney & Ellen Page (Netflix, June 7) - Every City Has a Tale. Every Home Has a Story.  Inspired by the books of Armistead Maupin, the new Netflix Limited Series Tales of the City begins a new chapter in the beloved story. Mary Ann (Laura Linney) returns to present-day San Francisco and is reunited with her adopted daughter Shawna (Ellen Page) and ex-husband Brian (Paul Gross), twenty years after leaving them behind to pursue her career. Fleeing the midlife crisis that her picture-perfect Connecticut life created, Mary Ann is quickly drawn back into the orbit of Anna Madrigal (Olympia Dukakis), her chosen family and a new generation of queer young residents living at 28 Barbary Lane.

Jinn (Netflix, June 13) - Set in modern day Amman, Jinn follows a group of Arab teenagers as their friendships and budding romances are tested when they unknowingly invite the supernatural forces of jinn into their world. As the lines between good and evil blur, can the friends find the answers needed in order to save everything?

Leila (Netflix, June 14) - India's first dystopian story, Leila is set in an imagined world, Aryavarta in which there is great suffering, extreme and totalitarian rules of engagement and fictional extremes constructed around an obsession with purity, communal and divisive societal dramas and grit. Leila is the story of a mothers’ imperishable maternal love for her daughter set in the political and emotional dystopia of Aryavarta.

Orange Is the New Black: The Final Season (Netflix, July 4) - A privileged New Yorker ends up in a women's prison when a past crime catches up with her in this Emmy-winning series from the creator of Weeds. Starring Taylor Schilling, Kate Mulgrew, and Laura Prepon.

Into the Dark: They Come Knocking (Hulu, June 7) - After losing his wife to cancer, a father takes his two daughters on a road trip where he finds his family in the crosshairs of terrifying supernatural entities.

Harlots: Season 3 (Hulu, July 10) - Margaret Wells struggles to reconcile her roles as brothel owner and mother to daughters Charlotte and Lucy. When her business comes under attack from Lydia Quigley, a rival madam with a ruthless streak, Margaret must fight back even if it means losing her family and possibly her life.

Finally, MotorTrend has announced the launch of a special 6-episode bonus season of Wheeler Dealers. The new episodes are now available to stream exclusively through the MotorTrend app. Here's a synopsis per MotorTrend:

In the new Wheeler Dealers episodes Mike and Ant take on a variety of automotive projects including a 1972 Fiat 124 Spider, a Toyota Land Cruiser FJ60, and a 2004 BMW M3. Additionally, the guys take on a special refurbishment—a 1965 Barracuda. They transform the Barracuda into a full drag racing car to challenge Top Fuel Champion Antron Brown’s hot rod at the famous Pomona Raceway quarter mile dragstrip. 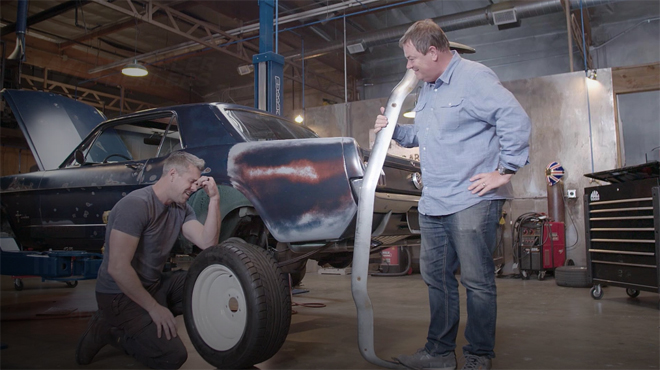