A teaser for Amazon's Jack Ryan and Netflix's Fuller House are among the latest streaming updates.

Netflix and Amazon have released new trailers and other info for several of their upcoming shows and movies, including Fuller House, Our Souls at Night, Big Mouth, The Death and Life of Marsha P. Johnson, Kingdom of Us, Mudbound, Lady Bird, Lore and Jack Ryan.

Fuller House: Season Three (Netflix, September 22) - In the spinoff series, Fuller House, life can take you into unexpected directions and also back into familiar territory when veterinarian and recently widowed D.J. Tanner-Fuller finds herself living in her childhood home with younger sister and aspiring musician Stephanie Tanner and DJ’s lifelong best friend/fellow single mother Kimmy Gibbler. The women reuniting to help support one another navigate careers, parenting and relationships with the kind of love and humor you can only get from the people you grew up with.

Our Souls at Night (Netflix, September 29) - Based on the novel written by Kent Haruf and adapted for the screen by Scott Neustadter and Michael H. Weber (The Fault in Our Stars), Our Souls at Night is set in Colorado and begins when Addie Moore (Jane Fonda) pays an unexpected visit to a neighbor, Louis Waters (Robert Redford). Her husband died years ago, as did his wife, and in such a small town they’d been neighbors for decades, but had little contact. Their children live far away and they are all alone in their big houses. She seeks to establish a connection, and make the most of the rest of the time they have.

Big Mouth (Netflix, September 29) - A 10-episode, half-hour edgy adult animated comedy from real-life best friends Nick Kroll and Andrew Goldberg about the glorious nightmare that is teenaged puberty. Comedian John Mulaney lends his voice to the character of Andrew, while Kroll (who serves as co-creator, executive producer) voices many including best friend Nick. Maya Rudolph, Jason Mantzoukas, Jordan Peele, Fred Armisen, Jenny Slate and Jessi Klein are among those who lend their voice to the series.

The Death and Life of Marsha P. Johnson (Netflix, October 6) - Who killed Marsha P. Johnson? She was one of the icons of the gay rights movement in the 1960s, the self-described "street queen" of NY's gay ghetto, and founded the Transvestites Action Revolutionaries with fellow luminary Sylvia Rivera. When Johnson's body was found in the Hudson River in 1992, police called it a suicide and didn't investigate. In David France's new documentary, trans activist Victoria Cruz seeks to uncover the truth of her death while celebrating her legacy.

Kingdom of Us (Netflix, October 13) - How does a traumatic event shape a family? How do you sift through the memories to find hidden clues and unlock a collective grief? Kingdom of Us takes a look at a mother and her seven children, whose father's suicide left them in financial ruin. Through home movies and raw moments, the Shanks family travels the rocky road towards hope.

Mudbound (Netflix, November 17) - Set in the post-WWII South, Mudbound is an epic story of two families pitted against a barbaric social hierarchy and an unrelenting landscape as they simultaneously fight the battle at home and the battle abroad. The film is about friendship, unacknowledged heritage and the unending struggle for and against the land. Newly transplanted from the quiet civility of Memphis, the McAllan family is underprepared and overly hopeful for Henry's (Jason Clarke) grandiose farming dreams. Laura (Carey Mulligan) struggles to keep the faith in her husband's losing venture, meanwhile, for Hap (Rob Morgan) and Florence Jackson (Mary J. Blige), whose families have worked the land for generations, every day is a losing venture as they struggle bravely to build some small dream of their own. The war upends both families’ plans as their returning loved ones, Jamie (Garrett Hedlund) and Ronsel (Jason Mitchell) forge a fast, uneasy friendship that challenges them all

Lady Bird (Netflix, Coming Soon) - Greta Gerwig reveals herself to be a bold new cinematic voice with her directorial debut, excavating both the humor and pathos in the turbulent bond between a mother and her teenage daughter. Christine “Lady Bird” McPherson (Saoirse Ronan) fights against but is exactly like her wildly loving, deeply opinionated and strong-willed mom (Laurie Metcalf), a nurse working tirelessly to keep her family afloat after Lady Bird's father (Tracy Letts) loses his job. Set in Sacramento, California in 2002, amidst a rapidly shifting American economic landscape, Lady Bird is an affecting look at the relationships that shape us, the beliefs that define us, and the unmatched beauty of a place called home.

Lore (Amazon Prime Video, October 13) - From the executive producer of The Walking Dead and the executive producer of The X-Files, this anthology series brings to life Aaron Mahnke's "Lore" podcast and uncovers the real-life events that spawned our darkest nightmares. Blending dramatic scenes, animation, archive and narration, Lore reveals how our horror legends - such as vampires, werewolves and body snatchers - are rooted in truth.

Jack Ryan (Amazon Prime Video, Coming Soon) - When CIA analyst Jack Ryan stumbles upon a suspicious series of bank transfers his search for answers pulls him from the safety of his desk job and catapults him into a deadly game of cat and mouse throughout Europe and the Middle East, with a rising terrorist figurehead preparing for a massive attack against the US and her allies.

Finally, FandangoNOW has launched a $1.99 "Binge Month" rental sale on more than 6,000 films. Discounted titles include movies like Guardians of the Galaxy, Kingsman: The Secret Service, The Revenant, Gone Girl, Frozen, The Wolf of Wall Street, Star Wars: Rogue One, The Godfather, Jaws, E.T., Forrest Gump, and more. In addition, the service is also offering 25% off all TV seasons.

Click here to check out all of the $1.99 titles. The sale will continue through the rest of September. 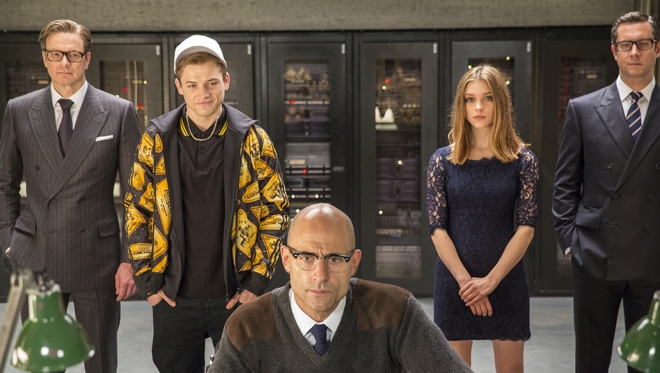