New sci-fi tales, stand-up specials, and more are all heading to your favorite streaming devices.

Craig Ferguson: Tickle Fight (Netflix, December 5) - Comedian and Emmy-winning television host Craig Ferguson brings his quick wit and offbeat humor to the stage as he returns with his second Netflix original one-hour stand-up special. Performing before a packed-house at Montreal's Ludger-Duvernay Theatre at the 2017 Just For Laughs Festival, Ferguson tackles topics including the challenges of growing a beard, his love of hating magicians, coming of age in the 70’s, social media angst, and sharing what he believes to be the oldest joke in the world.

El Camino Christmas (Netflix, December 8) - When Eric Roth (Luke Grimes) goes on an impulsive journey to find the father he never knew, his search takes him to the remote desert town of El Camino, Nevada, where he's mistaken for a drug dealer by local, dim-witted law enforcement and winds up pinned down in a liquor store holdup with five other lost souls on Christmas Eve...one of which is his father.

Judd Apatow: The Return (Netflix, December 12) - Writer/Director/Producer Judd Apatow returns to his stand-up roots in his debut Netflix comedy special, Judd Apatow: The Return. Filmed at the Montreal Just for Laughs Comedy Festival earlier this year, Apatow dives into the challenges of raising teenage daughters, the trials of binge watching, trying to make former President Obama laugh and more. Apatow is also the co-creator of the Netflix original series, Love.

El Chapo: Season Two (Netflix, December 15) - The series explores the life story of one of the world’s most notorious criminals, Joaquin "El Chapo" Guzman, over a span of three decades – from 1985 when he was a low-level member of the Guadalajara Cartel, his rise to power, and his ultimate downfall. El Chapo marks the first co-production between Univision’s Story House Entertainment and Netflix. The show is created by Silvana Aguirre Zegarra and produced by Daniel Posada

The Last Post (Amazon Prime Video, December 22) - In the mid-60s, a unit of Royal Military Police officers and their families deal with the challenges of politics, love and war in the shimmering heat of British-controlled Aden. Written by BAFTA winner Peter Moffat comes The Last Post, where life and love struggle to continue on as the Royal Military Police battle an insurgency in Yemen.

Meanwhile, Amazon has also revealed an official release date for Philip K. Dick’s Electric Dreams. The upcoming sci-fi anthology series will premiere on January 12, 2018. Here's a synopsis per Amazon: Based on various writings from author , each of the ten standalone episodes are set in a different and unique world – some which lay in the far reaches of the universe, and others which are much closer to home. While the stories may be worlds apart, central to each is the poignant and warm exploration of the importance and significance of humanity. From five to 5000 years in the future, each compelling tale will both illustrate  prophetic vision and celebrate the enduring appeal of the prized sci-fi novelist’s work.

In addition, the studio has announced plans to add Absentia to its lineup of streaming dramas in 2018. Here's a synopsis per Amazon: Starring and executive produced by Castle’s , Absentia centers on FBI agent  (Katic). While hunting one of Boston’s most notorious serial killers, Agent Byrne disappears without a trace and is declared dead. Six years later, Emily is found in a cabin in the woods, barely alive, and with no memory of the years she was missing. Returning home to learn her husband has remarried and her son is being raised by another woman, she soon finds herself implicated in a new series of murders. 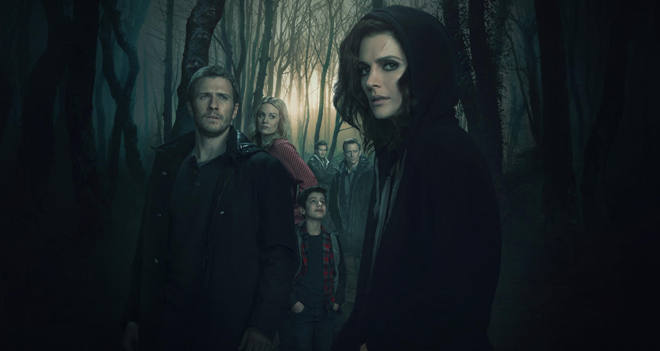 Finally, Hulu has announced the start of production on the second season of The Handmaid's Tale. New episodes are set to arrive in April, 2018. Here's a synopsis per Hulu: Adapted from the classic novel by Margaret Atwood, The Handmaid's Tale is the story of life in the dystopia of Gilead, a totalitarian society in what was formerly the United States. Facing environmental disasters and a plunging birthrate, Gilead is ruled by a twisted fundamentalism in its militarized ‘return to traditional values'. As one of the few remaining fertile women, Offred (Elisabeth Moss) is a Handmaid in the Commander’s household, one of the caste of women forced into sexual servitude as a last desperate attempt to repopulate the world. In this terrifying society, Offred must navigate between Commanders, their cruel Wives, domestic Marthas, and her fellow Handmaids – where anyone could be a spy for Gilead – all with one goal: to survive and find the daughter that was taken from her.