Hulu, Netflix, and CBS All Access have all released new previews and info for several of their upcoming series and films.

The Society (Netflix, May 10) - Follows a group of teenagers who are mysteriously transported to a facsimile of their wealthy New England town, left without any trace of their parents. As they struggle to figure out what has happened to them and how to get home, they must establish order and form alliances if they want to survive. The series is a modern take on Lord of the Flies.

The Mechanism: Season 2 (Netflix, May 10) - 2014. After presidential elections, Verena’s task force team has arrested 12 of Brazil's top 13 contractors. In this season, there is still one missing, the biggest of them all: Ricardo Brecht (Emilio Orciollo Netto). Verena (Caroline Abras) and Guilhome (Osvaldo Mil) and Vander (Jonathan Haagensen) remain engaged in their investigations, as well as Ruffo (Selton Mello): the retired deputy is still acting outside of the law and relentless in his pursuit of Ibrahim (Enrique Diaz), getting more estranged from his wife Regina (Susana Ribeiro) and daughter Beta (Julia Svaccina).

It's Bruno! (Netflix, May 17) - Follows dog lover Malcolm (Solvan “Slick” Naim), his best friend and canine companion Bruno, and the hilarious adventures that take place on their vibrant Brooklyn block.

Designated Survivor: Season 3 (Netflix, June 7) - A lower level United States Cabinet member is suddenly appointed President after a catastrophic attack during the State of the Union kills everyone above him in the Presidential line of succession.

Murder Mystery (Netflix, June 14) - When an NYC cop (Adam Sandler) finally takes his wife (Jennifer Aniston) on a long promised European trip, a chance meeting on the flight gets them invited to an intimate family gathering on the Super Yacht of elderly billionaire Malcolm Quince. When Quince is murdered, they become the prime suspects in a modern day whodunit. MURDER MYSTERY reunites Adam Sandler and Jennifer Aniston along with an ensemble cast of global talent.

The Twilight Zone (CBS All Access, May 9) - Episode 7, "Not All Men," stars Taissa Farmiga and is hosted by Academy Award winner Jordan Peele. A meteor shower spreads infection across an entire town… affecting some of the inhabitants more than others. Taissa Farmiga, Rhea Seehorn, Luke Kirby and Ike Barinholtz guest star.

The Handmaid's Tale: Season 3 (Hulu, June 5) - Adapted from the classic novel by Margaret Atwood, The Handmaid's Tale is the story of life in the dystopia of Gilead, a totalitarian society in what was formerly the United States. Facing environmental disasters and a plunging birthrate, Gilead is ruled by a twisted fundamentalism in its militarized ‘return to traditional values'. As one of the few remaining fertile women, Offred (Elisabeth Moss) is a Handmaid in the Commander’s household, one of the caste of women forced into sexual servitude as a last desperate attempt to repopulate the world. In this terrifying society, Offred must navigate between Commanders, their cruel Wives, domestic Marthas, and her fellow Handmaids – where anyone could be a spy for Gilead – all with one goal: to survive and find the daughter that was taken from her.

Veronica Mars (Hulu, July 26) - Spring breakers are getting murdered in Neptune, thereby decimating the seaside town’s lifeblood tourist industry. After Mars Investigations is hired by the family of one of the victims to find their son’s killer, Veronica is drawn into an epic eight-episode mystery that pits the enclave’s wealthy elites, who would rather put an end to the month-long bacchanalia, against a working class that relies on the cash influx that comes with being the West Coast’s answer to Daytona Beach.

Marvel's Ghost Rider - Ghost Rider, also known as Robbie Reyes, is a quintessential antihero, consumed by hellfire and supernaturally bound to a demon. Reyes lives on the Texas/Mexico border and when he unleashes the Rider, Robbie brings vengeance for the innocents he encounters, but struggles to control the power he wields.

Marvel's Helstrom - Daimon and Ana Helstrom are the son and daughter of a mysterious and powerful serial killer in Marvel's Helstrom. The siblings have a complicated dynamic as they track down the terrorizing worst of humanity — each with their attitude and skills. 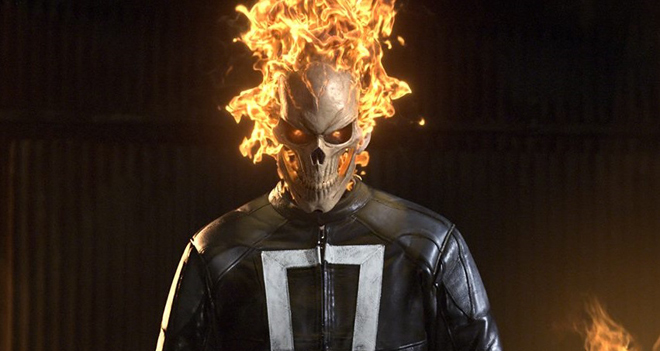