The raunchy German film coming to Blu-ray in January has been detailed. You can pre-order the disc here.

In an early announcement to retailers, Strand Releasing is preparing 'Wetlands' for Blu-ray on January 20.

The release will have 5.1 surround sound in German with English subtitles and supplements include alternate artwork and Trailers.

You can find the latest specs for 'Wetlands' linked from our Blu-ray Release Schedule, where it's indexed under January 20. 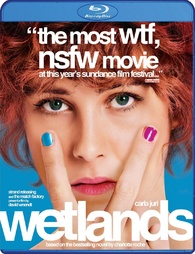