'The Way He Looks' Blu-ray Dated and Detailed

The Portuguese coming-of-age drama is headed for Blu-ray in March.

In an early announcement to retailers, Strand Releasing will be bringing 'The Way He Looks' to Blu-ray on March 17.

Set against the music of Belle and Sebastian, Daniel Ribeiro's coming of age tale, THE WAY HE LOOKS is a fun and tender story about friendship and the complications of young love. Leo is a blind teenager who's fed up with his overprotective mother and the bullies at school. Looking to assert his independence, he decides to study abroad to the dismay of his best friend, Giovana. When Gabriel, the new kid in town, teams with Leo on a school project, new feelings blossom in him that make him reconsider his plans. Meanwhile, Giovana, grows jealous of this new found companionship as tensions mount between her and Leo.

The Blu-ray will feature 1080p video, a lossless 5.1 soundtrack, and supplements will include: Behind-the-Scenes, Deleted Scenes, Interview with Cast and Crew, Short Film: I Don't Want To Go Back Alone, and Original Theatrical Trailer.

You can find the latest specs for 'The Way He Looks' linked from our Blu-ray Release Schedule, where it is indexed under March 17. 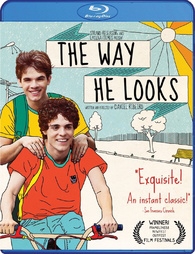