The acclaimed Canadian drama is headed for a high-definition release in January.

In an early announcement to retailers, Strand Releasing is preparing 'Closet Monster' for Blu-ray on January 10.

A fresh take on the coming-of-age story, this surreal tale follows the artistically driven Oscar (AMERICAN CRIME's Connor Jessup) hovering on the brink of adulthood. Struggling to find his place in the world after a rough childhood and haunted by images of a tragic incident, Oscar dreams of escaping his small town. After he meets a mysterious and attractive new co-worker, Oscar follows the guidance of his pet hamster Buffy (voiced by Isabella Rossellini) and faces his demons to find the life he wants.

The blu ray will feature 1080p video, a lossless 5.1 soundtrack, and supplements include behind-the-scenes featurettes, an interview with Director Stephen Dunn, and trailers.

You can find the latest specs for 'Closet Monster' linked from our Blu-ray Release Schedule, where it is indexed under January 10. 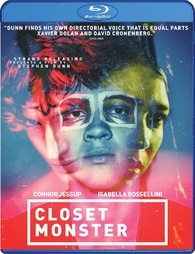