The film based on the Armenian genocide is planned for Blu-ray early next year.

In an early announcement to retailers, Strand Releasing will be releasing 'The Cut' on Blu-ray on January 19.

'The Cut' is Fatih Akin's epic drama about one man's journey through the Ottoman Empire after surviving the 1915 Armenian genocide. Deported from his home in Mardin, Nazareth (Tahar Rahim, A Prophet) moves onwards as a forced laborer. When he learns that his twin daughters may still be alive, his hope is revived and he travels to America, via Cuba, to find them. His search takes him from the Mesopotamian deserts and Havana to the barren and desolate prairies of North Dakota. On this odyssey, he encounters a range of very different people: angelic and kind-hearted characters, but also the devil incarnate.

Fatih Akin on the cinematic and literary inspirations for 'The Cut': "Elia Kazan's America America (1963), certain aesthetics of the cinematography, as well as shooting the film in English and naturally the long voyage of the young man through the impoverished towns and villages on the way to Constantinople. I had Westerns in my mind to inspire me, The Searchers (1956) by John Ford, and also Homer's The Odyssey certainly was a reference for me: The journey of the hero who tries to return to his family."

The Blu-ray will feature 1080p video, lossless 5.1 audio, and supplements include: Fatih Akin's Environmental Documentary Polluting Paradise (2012, 98 Minutes); Original Theatrical Trailer and Other Strand Releasing Trailers; and and MORE to be announced...

You can find the latest specs for 'The Cut' linked from our Blu-ray Release Schedule, where it is indexed under January 19. 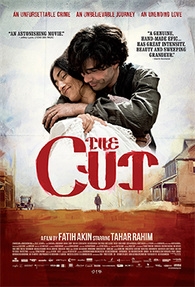