'The One I Love' Announced for Blu-ray

The critically-acclaimed romantic dramedy is headed for Blu-ray in November. Pre-order it now.

In an early announcement to retailers, Starz/Anchor Bay says 'The One I Love' will arrive on Blu-ray on November 4.

On the brink of separation, Ethan (Mark Duplass) and Sophie (Elisabeth Moss) escape to a beautiful vacation house for a weekend getaway in an attempt to save their marriage. What begins as a romantic and fun retreat soon becomes surreal, when an unexpected discovery forces the two to examine themselves, their relationship, and their future.

The Blu-ray will feature 1080p video, a lossless 5.1 soundtrack, and supplements will include: Feature Commentary with Director Charlie McDowell and Mark Duplass, and a Visual Effects Reel.

You can find the latest specs for 'The One I Love' linked from our Blu-ray Release Schedule, where it's indexed under November 4. 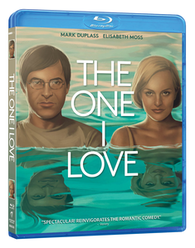