Alexandre Aja's latest thriller is up for Blu-ray pre-orders at Amazon.

As previously reported, Starz/Anchor Bay is working on 'Horns' for Blu-ray sometime in the coming weeks, and now the date has been set for January 6.

A supernatural thriller driven by fantasy, mystery, and romance, Horns follows Ig Perrish (Radcliffe), the number one suspect for the murder of his girlfriend, Merrin (Juno Temple). Hungover from a night of hard drinking, Ig awakens one morning to find horns growing from his head and soon realizes their power drives people to confess their sins and give in to their most selfish and unspeakable impulses–an effective tool in his quest to discover what happened to his girlfriend and exact revenge on her killer. Based on the best-selling novel by Joe Hill.

The Blu-ray will feature 1080p video, a lossless 5.1 soundtrack, and supplements include a making-of featurette.

You can find the latest specs for 'Horns' linked from our Blu-ray Release Schedule, where it's indexed under January 6. 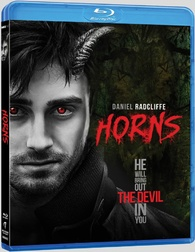