Lola is hitting the road on Blu-ray in April.

In an early announcement to retailers, Starz/Anchor Bay is preparing 'What Lola Wants' for Blu-ray on April 19.

Daughter of Hollywood royalty, sixteen year-old Lola Franklin fakes her own kidnapping and runs off into the New Mexico desert. In a roadside diner she meets the dangerous Marlo and they fall hard in love. But when Marlo learns of the reward for Lola’s safe return he must decide between the money that will save him from his past, or his love for Lola.

You can find the latest specs for 'What Lola Wants' linked from our Blu-ray Release Schedule, where it's indexed under April 19. 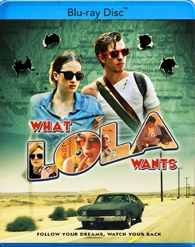 Discs mentioned in this article: (Click for specs and reviews)
What Lola Wants (Blu-ray)