'The Walking Dead: The Complete Fifth Season' Dated for Blu-ray

The fifth season of the hit AMC series is headed for Blu-ray in August.

In an early announcement to retailers, Starz/Anchor Bay is preparing 'The Walking Dead: The Complete Fifth Season' for Blu-ray on August 25.

The Walking Dead tells the story of the aftermath of a zombie apocalypse and follows a small group of survivors traveling across the United States in search of a new home away from the hordes of zombies. The group is led by Rick Grimes, who was a police officer in the old world. As their situation grows more and more grim, the group's desperation to survive pushes them to do almost anything to stay alive.

Specs and supplements haven't been revealed yet, but the suggested list price for the Blu-ray is $79.99.

Also be sure to get ready for AMC's spin-off series 'Fear the Walking Dead' premiering this summer. The new prequel series is set in Los Angeles and stars Cliff Curtis, Kim Dickens, Frank Dillane and Alycia Debnam-Carey.

You can find the latest specs for 'The Walking Dead: The Complete Fifth Season' linked from our Blu-ray Release Schedule, where it is indexed under August 25. 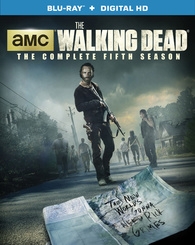