The Safdies' 'Heaven Knows What' On Its Way to Blu-ray

The critically acclaimed drama is planned for Blu-ray this fall.

In an early announcement to retailers, Starz/Anchor Bay says 'Heaven Knows What' will be available on Blu-ray on September 15.

You can find the latest specs for 'Heaven Knows What' linked from our Blu-ray Release Schedule, where it is indexed under September 15. 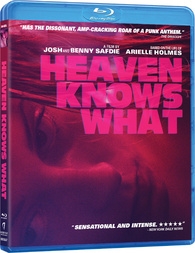