'The Giver' Blu-ray Announced and Detailed

The dystopian thriller heads to Blu-ray in November. Pre-order the Blu-ray.

In an early announcement to retailers, Starz/Anchor Bay says 'The Giver' will arrive on Blu-ray on November 25.

Directed by Phillip Noyce, the film is based on Lois Lowry’s beloved young adult novel of the same name, which was the winner of the 1994 Newbery Medal and has sold over 12 million copies worldwide.

The story of The Giver centers on Jonas (Brenton Thwaites), a young man who lives in a seemingly ideal, if colorless, world of conformity and contentment. Yet as he begins to spend time with The Giver (Jeff Bridges), who is the sole keeper of all the community’s memories, Jonas quickly begins to discover the dark and deadly truths of his community’s secret past. With this newfound power of knowledge, he realizes that the stakes are higher than imagined – a matter of life and death for himself and those he loves most. At extreme odds, Jonas knows that he must escape their world to protect them all – a challenge that no one has ever succeeded at before.

You can find the latest specs for 'The Giver' linked from our Blu-ray Release Schedule, where it is indexed under November 25. 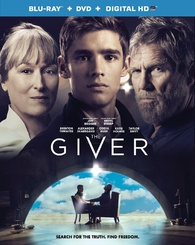