The series based on Steven Soderbergh's film arrives on Blu-ray in August.

In an early announcement to retailers, Starz/Anchor Bay says 'The Girlfriend Experience: Season One' will be available on Blu-ray on August 2.

Christine Reade (Riley Keough) is a second year student at Chicago-Burnham Law School, and a new intern at a prestigious firm. Working hard to establish herself at the firm, her focus quickly shifts when a classmate introduces her to the world of transactional relationships. Known as GFEs, they are women who provide "The Girlfriend Experience" - emotional and sexual relationships at a very high price. Juggling two very different lives, Christine quickly finds herself drawn into the GFE world, attracted to the rush of control and intimacy.

You can find the latest specs for 'The Girlfriend Experience: Season One' linked from our Blu-ray Release Schedule, where it is indexed under August 2. 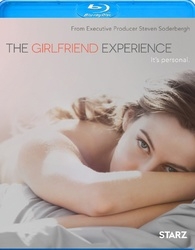