The Critically-Acclaimed 'The Imitation Game' Bound for Blu-ray

The Academy Award winner for Best Adapted Screenplay arrives on Blu-ray at the end of next month. You can pre-order it now!

In an early announcement to retailers, Starz/Anchor Bay is working on 'The Imitation Game' for Blu-ray on March 31.

During the winter of 1952, British authorities entered the home of mathematician, cryptanalyst and war hero Alan Turing (Benedict Cumberbatch) to investigate a reported burglary. They instead ended up arresting Turing himself on charges of “gross indecency” – an accusation that would lead to his devastating conviction for the criminal offense of homosexuality. Little did officials know, they were actually incriminating the pioneer of modern-day computing. Famously leading a motley group of scholars, linguists, chess champions and intelligence officers, he was credited with cracking the so-called unbreakable codes of Germany's World War II Enigma machine. An intense and haunting portrayal of a brilliant, complicated man, THE IMITATION GAME is the story of a genius who under nail-biting pressure helped to shorten the war and, in turn, save thousands of lives.

The Blu-ray will feature both the theatrical and unrated cuts with 1080p video, a lossless 5.1 soundtrack, and supplements include: The Making of THE IMITATION GAME, deleted scenes and special commentary. The Blu-Ray™ will also include the exclusive “Q&A Highlights” special feature.

You can find the latest specs for 'The Imitation Game' linked from our Blu-ray Release Schedule, where it is indexed under March 31. 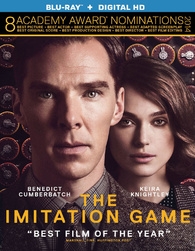