The crime drama series from creator Courtney Kemp Agboh and executive producer Curtis "50 Cent" Jackson is planned for Blu-ray in May. Pre-orders are now live.

In an early announcement to retailers, Starz/Anchor Bay is preparing 'Power: The Complete First Season' for Blu-ray on May 12.

'Power: The Complete First Season' is the story of James "Ghost" St. Patrick, a wealthy New York City nightclub owner who caters to the city's elite.  He wants to build an empire and turn the club into a Fortune 500 business, but there's just one problem: Ghost is living a double life.  When he is not in the club, he is the kingpin of the most lucrative drug network in New York for some very high-level clientele. His marriage, family and business all become unknowingly threatened as he is tempted to leave his criminal life behind and become the rags-to-riches businessman he wants to be.

The Blu-ray will feature 1080p video, a Dolby TrueHD 5.1 track, and supplements will include: The New Series; The Style of Power; NYC - The City of Power; and The Music of Power.

You can find the latest specs for 'Power: The Complete First Season' linked from our Blu-ray Release Schedule, where it is indexed under May 12 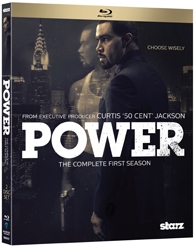 Discs mentioned in this article: (Click for specs and reviews)
Power: The Complete First Season (Blu-ray)