The remake of 'Ganja & Hess' arrives on Blu-ray at the end of May.

In an early announcement to retailers, Starz/Anchor Bay has revealed 'Da Sweet Blood of Jesus'' will be available on Blu-ray on May 26.

A Spike Lee Joint, 'Da Sweet Blood of Jesus' is a new kind of love story, one that centers on an addiction to blood that once doomed a long forgotten ancient African tribe. When Dr. Hess Green (Stephen Tyrone Williams) is introduced to a mysteriously cursed artifact by an art curator, Lafayette Hightower (Elvis Nolasco), he is uncontrollably drawn into a newfound thirst for blood that overwhelms his soul. However, he is not a vampire. Lafayette quickly succumbs to the ravenous nature of the infliction but leaves Hess a transformed man. Soon Lafayette's wife, Ganja Hightower (Zaraah Abrahams), comes looking for her husband and becomes involved in a dangerous romance with Hess that questions the very nature of love, addiction, sex, and status in our seemingly sophisticated society.

You can find the latest specs for 'Da Sweet Blood of Jesus'' linked from our Blu-ray Release Schedule, where it is indexed under May 26. 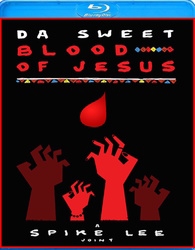