In an early announcement to retailers, Starz/Anchor Bay will be releasing 'Snowpiercer' on Blu-ray on October 21.

Based on the French graphic novel Le Transperceneige, Snowpiercer is set in AD 2031 and tells the story of a group of survivors stranded on a train in a post-apocalyptic world covered by snow and ice.

Specs haven't been revealed yet, but supplements include: Critics' Audio Commentary Hosted By Scott Weinberg; The Train Brought To Life: Behind The Scenes Of A Special Screening; TRANSPERCENEIGE: From The Blank Page To The Black Screen; The Birth Of Snowpiercer; The Characters; Animated Prologue; Concept Art Galleries; and Chris Evans & Tilda Swinton On Snowpiercer.

You can find the latest specs for 'Snowpiercer' linked from our Blu-ray Release Schedule, where it's indexed under October 21. 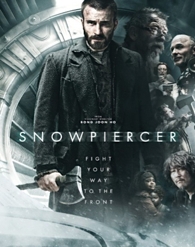