'Sin City: A Dame to Kill For' Blu-ray Up For Pre-Order

The long-awaited sequel is up for Blu-ray pre-orders at Amazon.

In an early announcement to retailers, Starz/Anchor Bay is already prepping 'Sin City: A Dame to Kill For' for Blu-ray sometime later this year.

Co-directors Robert Rodriguez and Frank Miller reunite to bring Miller's visually stunning "Sin City" graphic novels back to the screen in 'Sin City: A Dame To Kill For.' Weaving together two of Miller's classic stories with new tales, the town's most hard boiled citizens cross paths with some of its more notorious inhabitants.

You can find the latest specs for 'Sin City: A Dame to Kill For' linked from our Blu-ray Release Schedule, where it's indexed under PENDING. 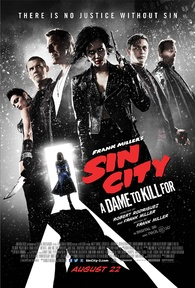