R.D. Braunstein's 'I Spit on Your Grave 3' Dated for Blu-ray

The sequel to the controversial franchise will prey on Blu-ray this October.

In an early announcement to retailers, Starz/Anchor Bay is working on 'I Spit on Your Grave 3' for Blu-ray on October 20.

Jennifer Hills (Sarah Butler) is still tormented by the brutal sexual assault she endured years ago (I SPIT ON YOUR GRAVE 2010). She’s changed identities and cities, reluctantly joining a support group where she begins to piece together a new life. But when her new friend’s murderer goes free and the tales of serial rapists haunt her, Jennifer will hunt down the men responsible and do what the system won’t – make them pay for their crimes in the most horrific ways imaginable. Only this time, no jury may be able to save her. Jennifer Landon (“The Young and the Restless”), Doug McKeon (ON GOLDEN POND) and Gabriel Hogan (“Heartland”) co-star in this unforgiving, unmerciful and uncut new chapter of one of the most notorious franchises in movie history.

You can find the latest specs for 'I Spit on Your Grave 3' linked from our Blu-ray Release Schedule, where it is indexed under October 20. 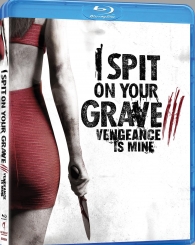