The second season of the crime drama series will be available on Blu-ray next month.

In an early announcement to retailers, Starz/Anchor Bay says 'Power: The Complete Second Season' will arrive on Blu-ray on June 14.

From Executive Producer Curtis "50 Cent" Jackson and show creator Courtney Kemp Agboh (The Good Wife) comes Season 2 of Power, a drama straddling the glamorous Manhattan lifestyles of the rich and infamous and the underworld of international drug trade. Season 2 picks up where it left off: James "Ghost" St. Patrick doubling down on his drug business to save his nightclub and dream of a legitimate future. Ghost's work troubles pale in comparison to juggling his relationship with his wife, Tasha, and his first love Angela, who's also an AUSA investigating his drug organization. Ghost is set further back from his dream by his business partner Tommy who loves the drug game, and his former mentor, Kanan, fresh out of jail, and looking for revenge. Season 2 has Ghost in a race against himself: Can he get out of the drug game alive before Angela discovers who he is?

Specs haven't been revealed yet, but the release will have exclusive extras including SN1 Recap, Inside the World of Power, Criminal Network and Journey of Kanan.

You can find the latest specs for 'Power: The Complete Second Season' linked from our Blu-ray Release Schedule, where it is indexed under June 14. 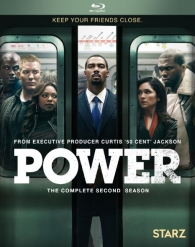