The family comedy is heading to Blu-ray soon, and you can pre-order the movie now.

As previously reported, 'Paddington' is set for Blu-ray later this year, and now the date has been set for April 28.

'Paddington' tells the story of the comic misadventures of a young Peruvian bear who travels to the city in search of a home. Finding himself lost and alone, he begins to realize that city life is not all he had imagined -until he meets the kindly Brown family who read the label around his neck that says "Please look after this bear. Thank you," and offer him a temporary haven. It looks as though his luck has changed until this rare talking bear catches the eye of a museum taxidermist. The film features an entirely computer-generated bear who interacts with a cast of esteemed actors.

The Blu-ray/DVD/Digital Copy Combo Pack will feature 1080p video, a lossless 5.1 soundtrack, and supplements include: Meet the Characters, When a Bear Comes to Stay, From Page to Screen and "Shine" Lyric Music Video written by Gwen Stefani & Pharrell, plus the Blu-ray exclusive The Making of "Shine" with Gwen Stefani & Pharrell.

You can find the latest specs for 'Paddington' linked from our Blu-ray Release Schedule, where it's indexed under April 28. 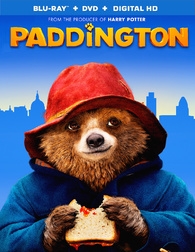