The sci-fi sequel will head into battle on Blu-ray in June, and you can pre-order the movie here.

In an early announcement to retailers, Starz/Anchor Bay is preparing 'Monsters: Dark Continent' for Blu-ray on June 2.

Ten years on from the events of Monsters, and the 'Infected Zones' have now spread worldwide. In the Middle East a new insurgency has begun. At the same time there has also been a proliferation of Monsters in that region. The Army decide to draft in more numbers to help deal with this insurgency.

The Blu-ray will feature 1080p video, a DTS-HD MA 5.1 soundtrack, and supplements will include a behind-the-scenes featurette

You can find the latest specs for 'Monsters: Dark Continent' linked from our Blu-ray Release Schedule, where it's indexed under June 2. 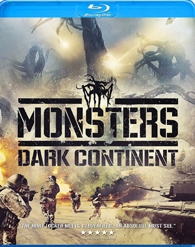