A young woman will embark on a quest for revenge in this action flick heading to Blu-ray in December. You can pre-order the movie here.

In an early announcement to retailers, Starz/Anchor Bay is preparing 'Kite' for Blu-ray on December 2. 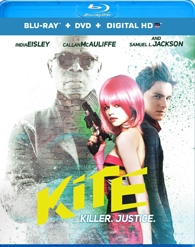 Never Underestimate a Girl with Nothing to Lose. Based on the groundbreaking, cult classic anime, 'Kite' tells the story of Sawa (India Eisley, 'The Secret Life of the American Teenager,' 'Underworld: Awakening'), a young woman living in a corrupt society where crime and gangs terrorize the streets. When Sawa’s mother and policeman father are found victims of a grisly double homicide, she begins a ruthless pursuit for the man who murdered them. With the help of her father’s ex-partner, Karl Aker (Samuel L. Jackson, 'Captain America: The Winter Soldier,' 'The Avengers,' 'Django Unchained'), and a mysterious friend from her past (Callan McAuliffe, 'The Great Gatsby,' 'I Am Number Four'), she becomes a merciless assassin, blasting her way through the dark world of human trafficking only to uncover a devastating truth.

The Blu-ray will feature 1080p video, a DTS-HD MA 5.1 soundtrack, and supplements will include The Making of Kite: A Behind the Scenes Featurette.

Suggested list price for the Blu-ray/DVD/UltraViolet combo pack is $30.99.

You can find the latest specs for 'Kite' linked from our Blu-ray Release Schedule, where it's indexed under December 2.

Discs mentioned in this article: (Click for specs and reviews)
Kite (2014) (Blu-ray)