'Keep on Keepin' On' Blu-ray Announced

Jazz legend Clark Terry is the focus in this music documentary set for Blu-ray. You can pre-order the film here.

In an early announcement to retailers, Starz/Anchor Bay is preparing 'Keep on Keepin' On' for Blu-ray sometime in the near future.

'Keep on Keepin’ On' depicts the remarkable story of 93-year-old jazz legend Clark Terry. A living monument to the Golden Era of Jazz, having played in both the Duke Ellington and Count Basie bands. He broke racial barriers on American television and mentored the likes of Miles Davis and Quincy Jones, but his most unlikely friendship is with Justin Kauflin, a 23-year old blind piano prodigy. Justin, fighting a debilitating case of stage fright, is invited to compete in a prestigious competition, while Clark’s health takes a serious turn. The two face the toughest challenges of their lives. The result is an intimate portrait of two remarkable men–a student striving against all odds and a teacher who continues to inspire through the power of music.

You can find the latest specs for 'Keep on Keepin' On' linked from our Blu-ray Release Schedule, where it's indexed under PENDING. 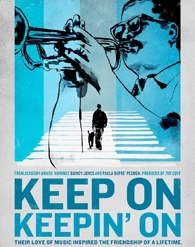 Discs mentioned in this article: (Click for specs and reviews)
Keep on Keepin' On (Blu-ray)