The boxing film will be taking a jab at Blu-ray next month.

In an early announcement to retailers, Starz/Anchor Bay says 'Hands of Stone' is headed for Blu-ray on November 22.

Hands of Stone follows the life of Roberto Durán (Edgar Ramírez), the Panamanian fighter who, with the help of his trainer Ray Arcel (Robert De Niro) made his professional debut in 1968 as a 16 year old and retired in 2002 at the age of 50. In June 1980, he defeated Sugar Ray Leonard (Usher Raymond) to capture the WBC welterweight title, but shocked the boxing world by returning to his corner in their November rematch, famously saying the words 'no más' ('no more').

The Blu-ray will feature 1080p video, 5.1 audio, and supplements have yet to be revealed.

You can find the latest specs for 'Hands of Stone' linked from our Blu-ray Release Schedule, where it is indexed under November 22. 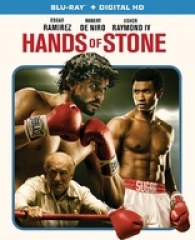