The action thriller starring Salma Hayek is heading to Blu-ray in April, and you can pre-order the movie now.

In an early announcement to retailers, Starz/Anchor Bay is preparing 'Everly' for Blu-ray on April 21.

An action/thriller centered on a woman who faces down assassins sent by her ex, a mob boss, while holed up in her apartment. Starring Salma Hayek, Jennifer Blanc, and Togo Igawa. Directed by Joe Lync.

You can find the latest specs for 'Everly' linked from our Blu-ray Release Schedule, where it's indexed under April 21. 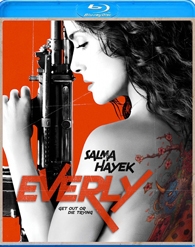 Discs mentioned in this article: (Click for specs and reviews)
Everly (Blu-ray)