'It Follows' Blu-ray up for Pre-Order!

The critically acclaimed horror flick will stalk Blu-ray in 2015, and you can pre-order the movie now.

In an early announcement to retailers, Starz/Anchor Bay is preparing 'It Follows' for Blu-ray later this year.

For nineteen-year-old Jay, Autumn should be about school, boys and week-ends out at the lake. But after a seemingly innocent sexual encounter, she finds herself plagued by strange visions and the inescapable sense that someone, something, is following her. Faced with this burden, Jay and her friends must find a way to escape the horrors that seem to be only a few steps behind.

You can find the latest specs for 'It Follows' linked from our Blu-ray Release Schedule, where it's indexed under PENDING. 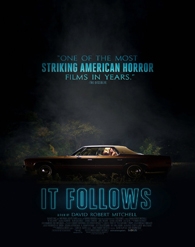 Discs mentioned in this article: (Click for specs and reviews)
It Follows (Blu-ray)