Horror Thriller 'The Atticus Institute' Will Possess Blu-ray in January

The upcoming horror flick is now available for pre-order.

In an early announcement to retailers, Starz/Anchor Bay is preparing 'The Atticus Institute' for Blu-ray on January 20.

In the fall of 1976, a small psychology lab in Pennsylvania became the unwitting home to the only government-confirmed case of possession. The U.S. military assumed control of the lab under orders of national security and, soon after, implemented measures aimed at weaponizing the entity. The details of the inexplicable events that occurred are being made public after remaining classified for nearly forty years.

You can find the latest specs for 'The Atticus Institute' linked from our Blu-ray Release Schedule, where it's indexed under January 20. 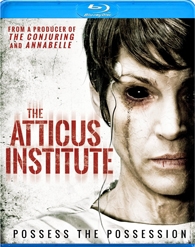 Discs mentioned in this article: (Click for specs and reviews)
The Atticus Institute (Blu-ray)