The film starring Rinko Kikuchi, Nobuyuki Katsube, and Shirley Venard will be available on Blu-ray at the end of June.

In an early announcement to retailers, Starz/Anchor Bay will be releasing 'Kumiko, The Treasure Hunter' on Blu-ray on June 30.

Kumiko (Rinko Kikuchi) is a cubicle-bound office worker seeking to escape her dour working life. Relying on her imagination and unabashed courage, Kumiko thinks she has found a way out: she has become obsessed with a battered tape of a popular film – mistaking it for a documentary. In particular she is fixated on the scene where a suitcase of stolen cash has been buried in North Dakota's bleak landscape. Believing this treasure to be real and waiting to be discovered, Kumiko leaves behind Tokyo and her beloved rabbit Bunzo to recover it – and finds herself on a dangerous adventure unlike anything she's seen in the movies.

You can find the latest specs for 'Kumiko, The Treasure Hunter' linked from our Blu-ray Release Schedule, where it is indexed under June 30. 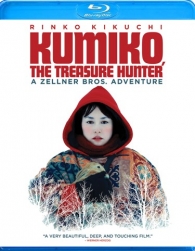