The critically-acclaimed horror flick from writer/directors Veronika Franz and Severin Fiala is bound for Blu-ray in December.

In an early announcement to retailers, Starz/Anchor Bay will be releasing 'Goodnight Mommy' on Blu-ray on December 1.

“Unsettling.” “Terrifying.” “Sinister.” The most talked about movie of summer and one of the most critically-acclaimed films of the year is “masterful and artfully unsettling”, generating strong Oscar® buzz as Austria’s official 2016 entry for Best Foreign Language Film.

In a lonesome house in the countryside in the heat of mid-summer, nine year old twin brothers await their mother's return from the hospital. When she comes home with her face obscured by bandages, nothing is like before and the children start to doubt whether this woman is actually who she says she is. What ensues is a terrifying struggle with fatal consequences on par with The Shining and Dead Ringers in what The Daily Beast calls "the most terrifying film of the year."

Specs haven't been revealed yet, but supplements include: A Conversation with Filmmakers Veronika Franz and Severin Fiala.

You can find the latest specs for 'Goodnight Mommy' linked from our Blu-ray Release Schedule, where it is indexed under December 1. 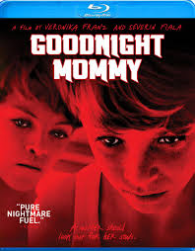