The first season of the Starz pirate drama is setting sail for Blu-ray in January. You can pre-order the show now.

In an early announcement to retailers, Starz/Anchor Bay is preparing 'Black Sails: Season One' for Blu-ray on January 6.

The highly anticipated pirate adventure, 'Black Sails,' centers on the tales of Captain Flint and his men and takes place twenty years prior to Robert Louis Stevenson's classic 'Treasure Island.' Flint, the most brilliant and most feared pirate captain of his day, takes on a fast-talking young addition to his crew who goes by the name John Silver. Threatened with extinction on all sides, they fight for the survival of New Providence Island, the most notorious criminal haven of its day – a debauched paradise teeming with pirates, prostitutes, thieves and fortune seekers, a place defined by both its enlightened ideals and its stunning brutality.

The Blu-ray will feature 1080p video, a Dolby TrueHD 7.1 soundtrack, and supplements will include: Black Sails: A Look Inside; Dress To Kill; Pirate Camp; Folklore Is Finished: Pirate Politics; A Place In History; and Building The Behemoth.

You can find the latest specs for 'Black Sails: Season One' linked from our Blu-ray Release Schedule, where it's indexed under January 6. 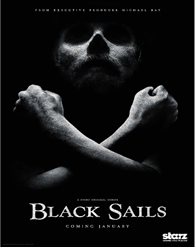 Discs mentioned in this article: (Click for specs and reviews)
Black Sails: Season One (Blu-ray)