In an early announcement to retailers, Starz/Anchor Bay will be releasing 'Begin Again' on Blu-ray on October 28.

From writer-director John Carney (Once), BEGIN AGAIN is a soul-stirring story about what happens when lost souls meet and make beautiful music together. Gretta (Keira Knightley) and her long-time boyfriend Dave (Adam Levine) are college sweethearts and songwriting partners who go to New York City when Dave lands a deal with a major record label. But the excitement of Dave’s new-found fame affects the couple in unexpected ways, leaving Gretta unsure of her future—until Dan (Mark Ruffalo), a record label executive with a few problems of his own, stumbles across her performance on an East Village stage. Dan is immediately captivated by Gretta’s raw talent and unique sound, leading to a life-changing collaboration, set to the soundtrack of a summer in New York City.

The Blu-ray will feature 1080p video, lossless 5.1 audio, and supplements include a making-of featurette and music videos.

You can find the latest specs for 'Begin Again' linked from our Blu-ray Release Schedule, where it is indexed under October 28. 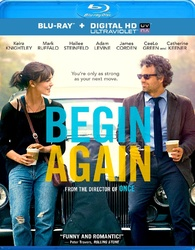