The horror film starring Billy Zane, Dee Wallace, and Felissa Rose will be available on Blu-ray in February as a Best Buy exclusive.

In an early announcement to retailers, Starz/Anchor Bay will release 'Zombie Killers: Elephant's Graveyard' on Blu-ray on February 3 at Best Buy, with a retailer wide release on May 5.

Determined to make it as an actress in Hollywood, Sarah Walker (Alex Essoe) spends her days working a dead-end job, enduring petty friendships with other struggling artists and competing actors, and going on countless casting calls in hopes of catching her big break. After a series of strange auditions, Sarah lands the leading role in a film from a mysterious production company. But this opportunity comes with some bizarre conditions that will transform her both mentally and physically into something beautiful... and altogether terrifying.

Specs have yet to be revealed, but supplements include: Bloodbath and Beyond, The Look of Zombie Killers: Elephant's Graveyard, and Behind the Scenes.

You can find the latest specs for 'Zombie Killers: Elephant's Graveyard' linked from our Blu-ray Release Schedule, where it is indexed under May 5. 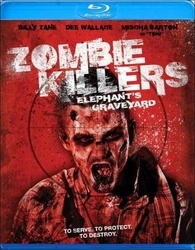