In an early announcement to retailers, Starz/Anchor Bay is working on 'Escobar: Paradise Lost' for Blu-ray on October 6.

Young surfer Nick (Josh Hutcherson) thinks all his dreams have come true when he goes to visit his brother in Colombia. Against an idyllic backdrop of blue lagoons and white beaches, he falls madly in love with Maria (Claudia Traisac,"Cuentame"). It all seems perfect until he meets her uncle, the famous drug kingpin Pablo Escobar (Del Toro) and he finds his life is on the line when he's pulled into the dangerous world of the family business.

You can find the latest specs for 'Escobar: Paradise Lost' linked from our Blu-ray Release Schedule, where it's indexed under October 6. 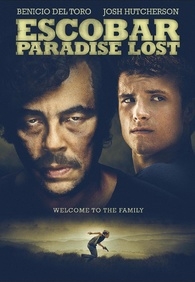