The first season of the AMC drama series is now available to pre-order.

In an early announcement to retailers, Starz/Anchor Bay is preparing 'Halt and Catch Fire: The Complete First Season' for Blu-ray on May 5.

At the dawn of the PC era, 3 unlikely "cowboys," Joe MacMillan, Gordon Clark and Cameron Howe, take personal and professional risks in the race to build a breakthrough computer. Tensions build within the group as they tread the line between visionary and fraud, genius and delusion, as their drive to do something that matters runs up against their ability to truly innovate. The series begins in the early 80s in Dallas, aka The Silicon Prairie, during the boom of the computer industry. IBM has released the first PC and is seemingly dominating the cutthroat field. MacMillan, Gordon and Cameron form an alliance at the smaller (fictional) tech company, Cardiff Giant, infiltrating it from within and using its people and resources to revolutionize the computer, shake up the competition and redeem their past personal failures. The show is not just about the ruthless rise of the computer business, or the obsessive striving for competitive advantage in the marketplace. Rather, it’s about people at war with themselves as they search for something bigger. During their search, they'll struggle with the dark side of the human ego, the destructive power of ambition, and the often thin line separating genius from delusion.

The Blu-ray/Digital HD combo pack will feature 1080p video, a Dolby TrueHD 5.1 soundtrack, and supplements will include: Inside Episodes; Re-Making The 80s; Rise Of The Digital Cowboys; and Setting The Fire: Research And Technology.

You can find the latest specs for 'Halt and Catch Fire: The Complete First Season' linked from our Blu-ray Release Schedule, where it's indexed under May 5. 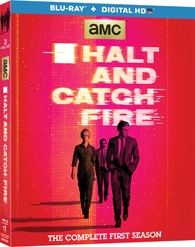 Discs mentioned in this article: (Click for specs and reviews)
Halt and Catch Fire: The Complete First Season (Blu-ray)