The first season of the hit AMC series is bound for Blu-ray in March.

In an early announcement to retailers, Starz/Anchor Bay says 'Turn: Washington's Spies - The Complete First Season' will be marching to Blu-ray on March 17.

Based on Alexander Rose’s book Washington’s Spies, AMC’s TURN tells the untold story of America’s first spy ring. A historical thriller set during the Revolutionary War, TURN centers on Abe Woodhull (Jamie Bell), a farmer living in British-occupied Long Island who bands together with his childhood friends to form The Culper Ring -- an unlikely team of secret agents who not only went on to help George Washington turn the tide of the war but also gave birth to modern spycraft.

The 3-Disc Set will feature 1080p video, a Dolby TrueHD 5.1 soundtrack, and supplements include: The History of Turn: Washington's Spies, From Art to Image, and Deleted Scenes.

You can find the latest specs for 'Turn: Washington's Spies - The Complete First Season' linked from our Blu-ray Release Schedule, where it is indexed under March 17. 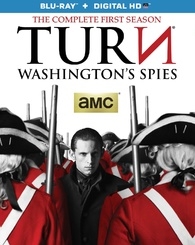