Everything You Need to Know About Han Solo Before Seeing SOLO: A STAR WARS STORY

One of the most beloved and iconic Star Wars characters is finally getting his own movie in this vast sea of Disney-era Star Wars projects. The guy who originally shot first, made the Kessel Run in less than 12 parsecs, and told the love of his life "I know", is set to star Solo: A Star Wars Story, the second spin-off film in the Star Wars franchise, following Rogue One.

The character of Han Solo is a fan favorite for a variety of reasons and the way Harrison Ford portrayed this character is nothing short of legendary. He is just the epitome of cool, from his dialogue to his outfit and blaster gun.

Everyone just wants to be Han Solo.

Still, while there's a lot said an even alluded to about the man in the Star Wars franchise, nothing has ever been explained or explored in regard to this character -- at least in the motion picture realm -- which is what makes a solo Solo movie so exciting. What is it really about? What will we see and learn? Here's everything you need to know about Han Solo before seeing Solo: A Star Wars Story.

[EDITOR'S NOTE: there are NO SPOILERS in this article -- it was written before Bryan saw Solo -- BUT if you want to go into the movie with no idea what to expect, then you should skip this article altogether. Cheers!] 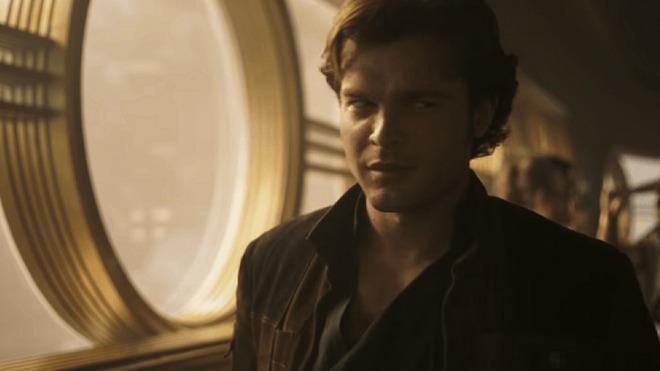 This is Only the First Solo Movie

The actor playing Han Solo (Alden Ehrenreich), has stated in multiple interviews that he has signed on for three Star Wars films, but it's unclear at this time if the other two movies will be direct sequels to this film or if Solo will just show up as cameo roles in future Star Wars Story films. That being said, there is a ton to discuss when it comes to Han Solo's background and it would be hard to fit into this one film. Regardless, if this version of Han Solo works, we can expect at least two more appearances.

Who is Tobias Beckett (Woody Harrelson)?

As seen in the trailers, Woody Harrelson is playing a guy named Tobias Beckett. I'm guessing this is going to be the "father-figure" and mentor to a young Han Solo. He's a criminal, smuggler, and perhaps takes a paternal liking to Han early on. I'm going to compare this relationship to Yondu and Star-Lord from Guardians of the Galaxy, but in a more western sort of way. I think Tobias will be the major influence in Han's life in regards to mannerisms and actions in the future. 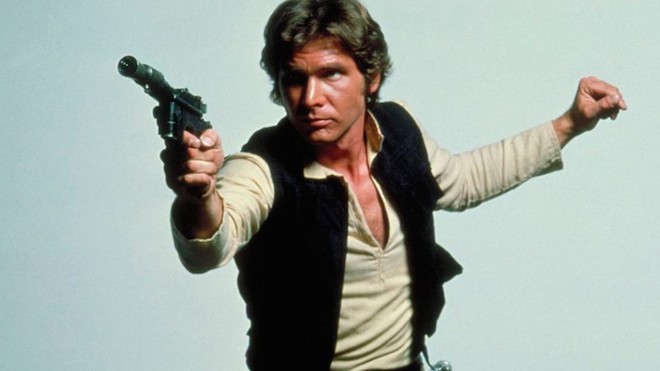 To go with the above topic, I do believe Tobias will showcase his personality in that a young Han Solo will mimic and adopt for himself, such as the cowboy attitude along with a ton of wit and pessimism. I also think this is where Han will learn to shoot first and ask questions later. Speaking of shooting, I do believe we will see Tobias teach Han how to shoot his blaster and become an excellent marksman, as well as to talk his way out of any situation. This should be quite comical. 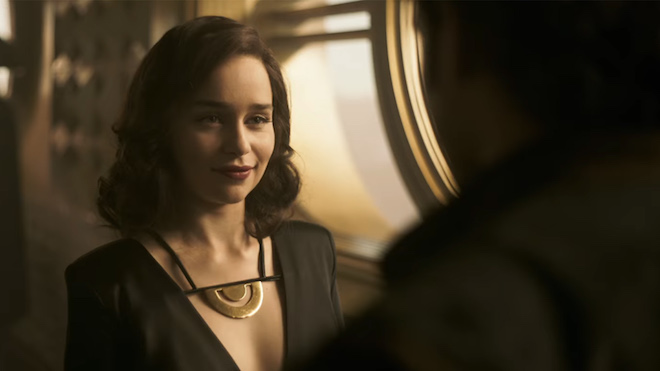 Who is Qi'ra (Emilia Clarke)?

The leading female role in Solo: A Star Wars Story is Qi-ra, played by Game of Thrones' Emilia Clarke. Not much is known about the character outside of the fact that Qi'ra and Han have known each other for a long time and have been in the smuggling and criminal world for quite a while. I imagine there is a romance here, but since they've known each other for so long, they might be more like brother and sister. In addition to that, I'm willing to bet that Qi'ra will hold all the same traits and elegance that Princess Leia is known for, which is why Han falls so hard for the princess in the original trilogy. 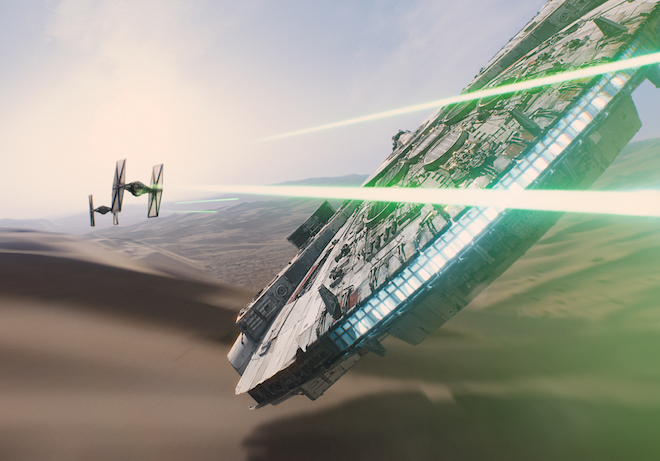 Of course, the Millennium Falcon will be a big part of Solo, as it is with most Stars Wars movies. We've seen the Falcon go through some rough times for sure, where a ton of people think it's junk. Here, as shown in the trailers, we'll see a clean, brand new Millennium Falcon. That being said, our bet is that it won't yet have the special modifications that Han makes to it that we see later in A New Hope. I'm willing to bet we will see all of the cool technical advances Solo makes to the Falcon here that will make him famous. 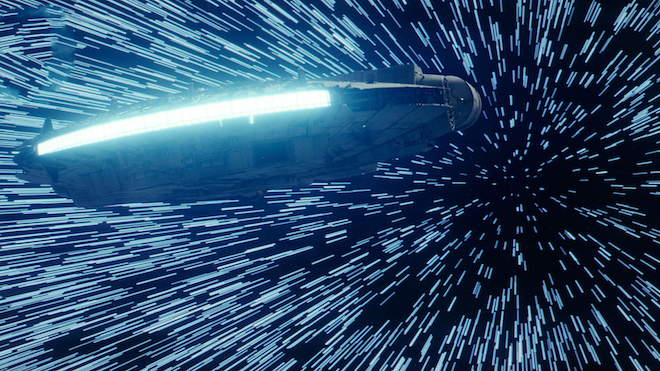 There is no doubt in my mind that we will see the Kessel Run in Solo. What is the Kessel Run? It was a route taken by smugglers to move goods and spices from Kessel under the nose of a notorious criminal. Solo claims to have made this smuggling run in less than 12 parsecs, which is trillions of miles. Solo is the record holder and by accomplishing this, Han becomes famous across the galaxy, which probably leads to a ton of new jobs. We are going to see Solo fly the Falcon in this Kessel Run for sure, which might lead to a certain Hutt hearing about his name and hiring him. 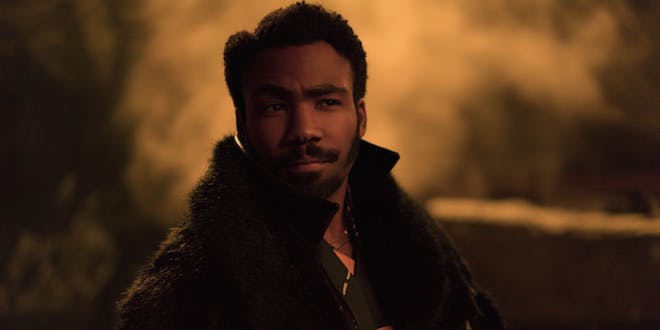 The Relationship with Lando Calrissian

The most charming man in the galaxy might be the smooth-talking Lando Calrissian. Originally played by Billy Dee Williams, the impressive Donald Glover is taking over the part of younger Lando, so we'll get to see the origins of the Han-Lando relationship. In the original trilogy, Han takes Luke, Leia, and Chewbacca to Bespin in the Cloud City to seek refuge and help from his old friend Lando. Before arriving, Han tells everyone that his relationship with Lando might not be great, because something happened in the past. Not only that, Han Solo won the Millennium Falcon in a card game from Lando, which might add to the tension. We are going to see how this card game went down and what Han pulled to make their friendship sour, at least for a little while. 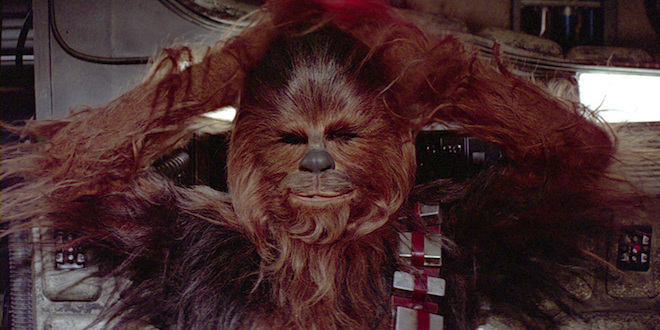 You can't mention Han Solo without talking about his best friend, Chewbacca. Whenever this is Han Solo around, his Wookie partner, Chewbacca, is right beside him, protecting him and/or laughing at Han's mistakes. We know Han and Chewie were teamed up long ago and Chewbacca is carrying out a life debt to Han because Han somehow saved Chewbacca's life. I do believe we will see the origin of this friendship and debt in Solo. I bet we will see Chewbacca, along with a few other Wookies, imprisoned and being tortured by some ruthless villains. Perhaps Han saves the day along with Chewbacca and, as they escape, both learn they can fly a ship. Also, it will be great to see how Han Solo and Chewbacca are able to communicate with one another. It would be great to see if they go with the story of Han Solo training to be a pilot for the Empire, but he sees some people torturing Chewbacca, which leads him to save Chewbacca and get kicked out of the pilot program, pushing them both into smuggling. 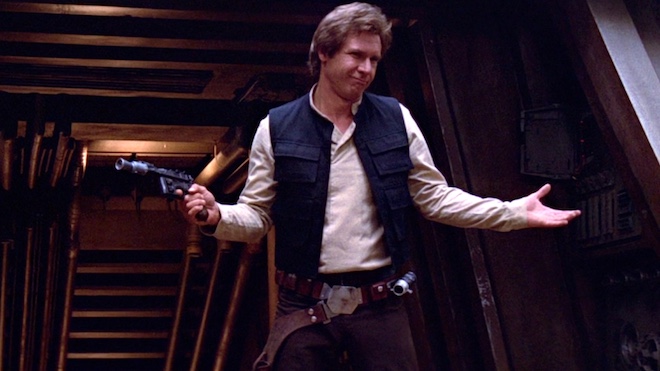 Han Solo and The Force

In the original trilogy, Han Solo thinks that Force-users, the Jedi, and The Force itself is a bunch of nonsense and magic. So I'm wondering if we will see some ill will, or perhaps a Jedi turned bad who tricks Solo into doing something. Of course, Tobias could be a part of this in Han's thinking, but prior to meeting Luke Skywalker and Obi-Wan, Solo has no need or love for The Force. We will see something happen in regards to this at some point during this movie. 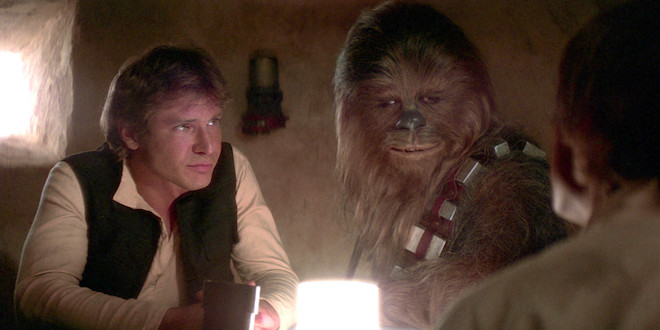 Ties to the Original Trilogy

Much like we saw in Rogue One, which led right up to the original Star Wars movie, we might get something similar here. After all said and done, we might hear or even see a mention or cameo of Jabba the Hutt who wants to hire Han Solo, or even solo headed to that hive of scum and villainy in Mos Eisley, which we might see a super young motion-capture Harrison Ford as Han Solo - and dare I say we might see that he actually shoots first?

What about you, dear readers? What do you expect to see in Solo, and what are you hoping to see and learn? Let us know in the comments below.