The new internet TV service for cord-cutters is now available in select cities.

Sony has announced the commercial launch of its PlayStation Vue platform. The cloud-based TV service is now available starting at $50 per month in New York, Chicago and Philadelphia.

"The TV experience needs a revolution and PlayStation Vue changes the rules by embracing how today's viewers want to discover and enjoy content," said Andrew House, President and Global CEO of Sony Computer Entertainment Inc. and Group Executive in charge of the Network Entertainment Business. "PlayStation Vue modernizes the TV viewing experience, taking the best of live TV and on-demand content and bringing it to the PlayStation ecosystem in a way that gives control back to viewers and enables them to spend more time watching their favorite programs and less time channel surfing using outdated menus." 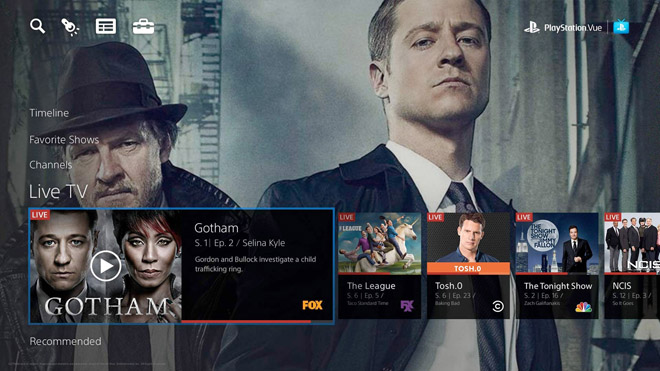 PlayStation Vue is currently only available through the PlayStation 3 and PlayStation 4. The service offers live and on-demand content from more than 85 channels, including popular stations from CBS, FOX, NBCUniversal, Viacom, AMC, Turner, Discovery Communications, and Scripps Networks Interactive. The platform enables viewers to easily search through available programming with an intuitive interface and convenient personal recommendations. In addition, if customers tag a favorite series they will be given cloud access to episodes of that show for 28 days with no storage restrictions.

A full nationwide PlayStation Vue launch is expected by the end of the year. Likewise, support for the Apple iPad and more non-Sony devices is planned for the future. PlayStation Vue now joins an increasing number of subscription based cord-cutting services, including Sling TV, CBS All Access, and HBO Now.