More channels have arrived on the internet TV platform.

Sony has announced the addition of four new channels to its PlayStation Vue service. The new networks are AMC, IFC, Sundance, and WEtv.

PlayStation Vue is currently only available through the PlayStation 3 and PlayStation 4 in New York City, Chicago, and Philadelphia. The service offers live and on-demand content from more than 85 channels, including popular stations from CBS, FOX, NBCUniversal, Viacom, Turner, Discovery Communications, Scripps Networks Interactive, and now recent addition AMC. The platform enables viewers to easily search through available programming with an intuitive interface and convenient personal recommendations. In addition, if customers tag a favorite series they will be given cloud access to episodes of that show for 28 days with no storage restrictions. 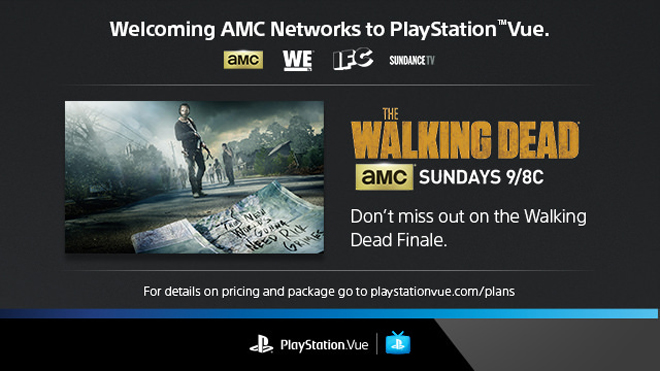 AMC and WEtv are now included in all of the PlayStation Vue content packages, starting with the base Access package at $50 per month. IFC and Sundance are only available in the step-up Core ($60 per month) and Elite ($70 per month) packages. With these new channels, PlayStation Vue users now have access to many popular shows like 'The Walking Dead,' 'Better Call Saul,' and 'Portlandia.'

A full nationwide PlayStation Vue launch is expected by the end of the year. Likewise, support for the Apple iPad and more non-Sony devices is planned for the future. PlayStation Vue now joins an increasing number of subscription based cord-cutting services, including Sling TV, CBS All Access, and HBO Now.