The streaming TV platform is now available through Roku devices.

Sony has announced the expansion of its PlayStation Vue internet TV service to Roku products. The cloud based streaming platform is now available on Roku media players, Roku Stick, and Roku TVs. In addition, the service is set to launch on Android smartphones and tablets next week

PlayStation Vue offers live and on demand content from a growing collection of channels. The platform enables viewers to easily search through available programming with an intuitive interface and convenient personal recommendations. In addition, if customers tag a favorite series they will be given cloud access to episodes of that show for 28 days with no storage restrictions. Likewise, PlayStation Vue offers up to five simultaneous streams across different devices, including up to three mobile devices outside of the home. 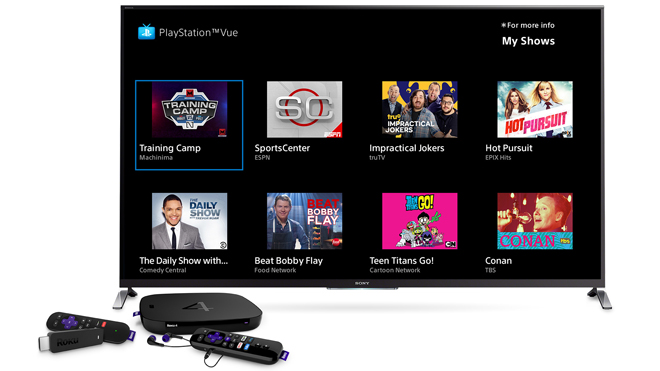 - Core: 70+ channels, including all the channels from Access with the addition of live national and regional sports networks for $34.99 per month ($44.99 in New York, Los Angeles, Chicago, Philadelphia, Dallas, San Francisco, and Miami)

- Elite: 100+ channels, featuring all the channels from Core with the addition of top movie and entertainment channels for $44.99 per month ($54.99 in New York, Los Angeles, Chicago, Philadelphia, Dallas, San Francisco, and Miami)