The acclaimed director's latest drama is coming to Blu-ray in March.

In an early announcement to retailers, Sony is preparing 'Coming Home' for Blu-ray on March 8.

Lu (Chen Daoming) and Feng (Gong Li) are a devoted couple forced to separate when Lu is arrested and sent to a labor camp as a political prisoner during the Cultural Revolution. When Lu is released years later, he returns home to find his beloved wife has amnesia and remembers little of her past. Unable to recognize him, she still patiently awaits her husband's return. A stranger within his own family, Lu is determined to awaken his wife's memory through gentle displays of unconditional and eternal love.

The Blu-ray will feature 1080p video, a Mandarin DTS-HD MA 5.1 soundtrack, and supplements will include: Toronto International Film Festival Q & A with Zhang Yimou and Directors Commentary.

You can find the latest specs for 'Coming Home' linked from our Blu-ray Release Schedule, where it's indexed under March 8. 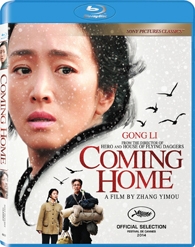 Discs mentioned in this article: (Click for specs and reviews)
Coming Home (2014) (Blu-ray)